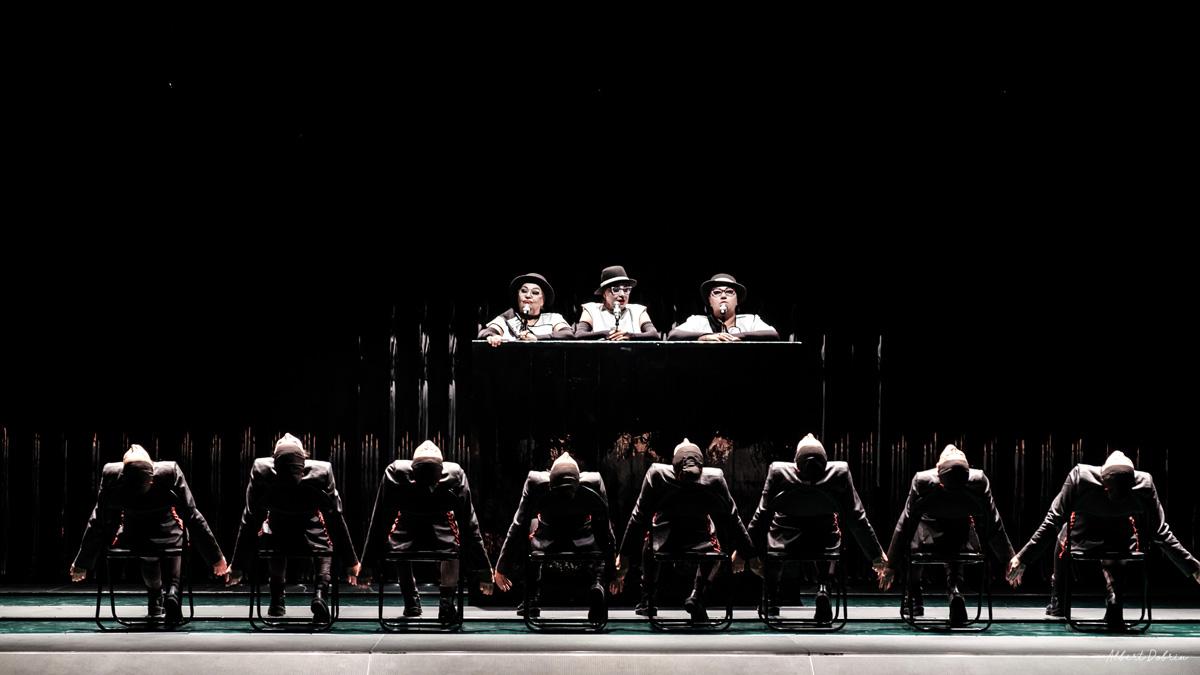 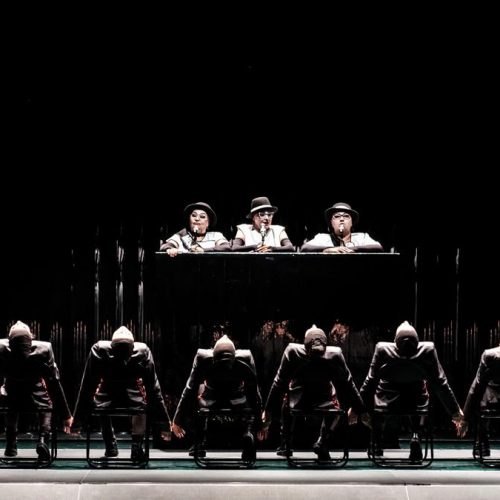 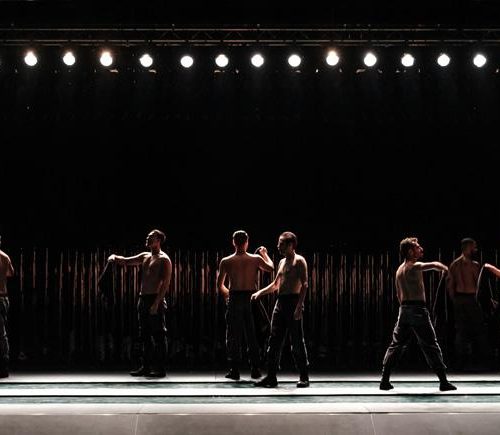 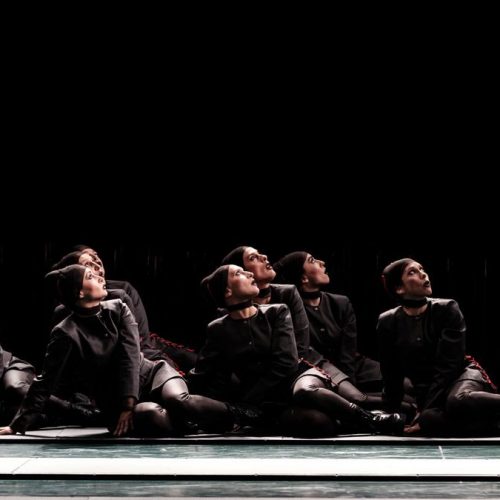 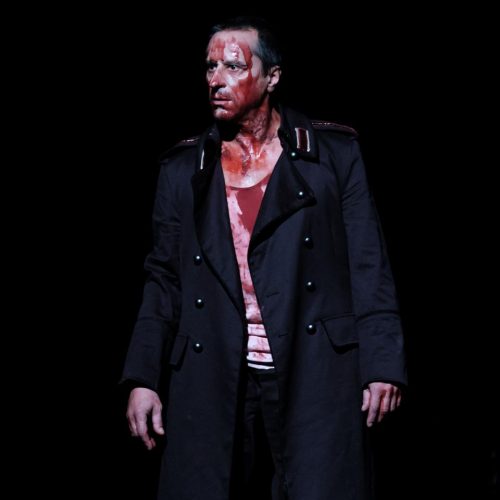 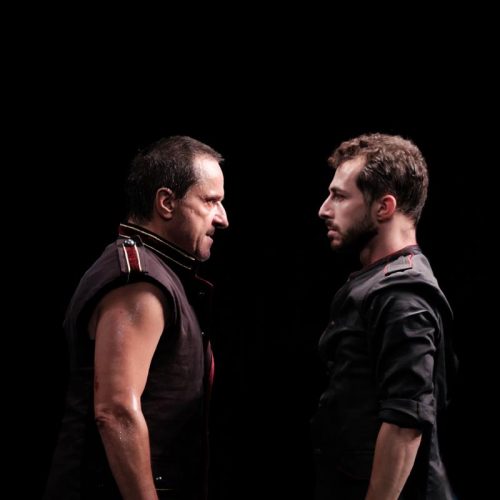 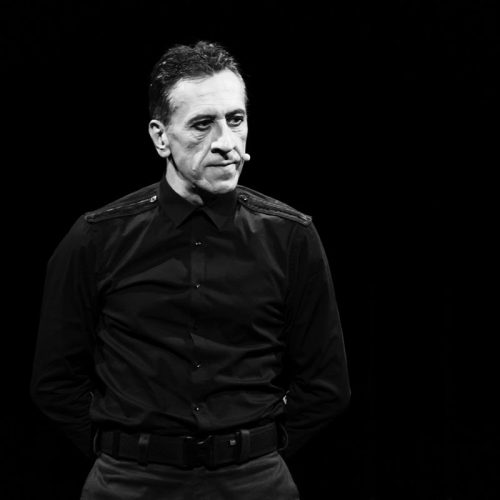 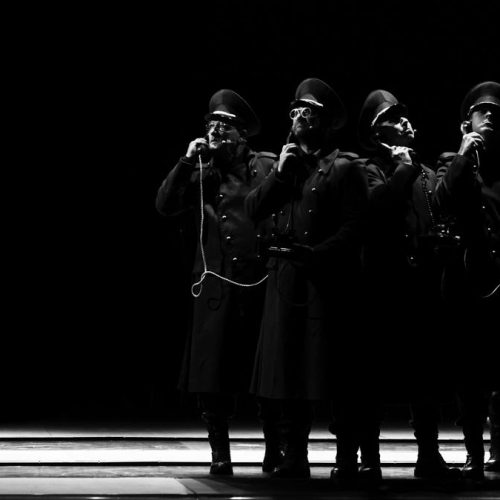 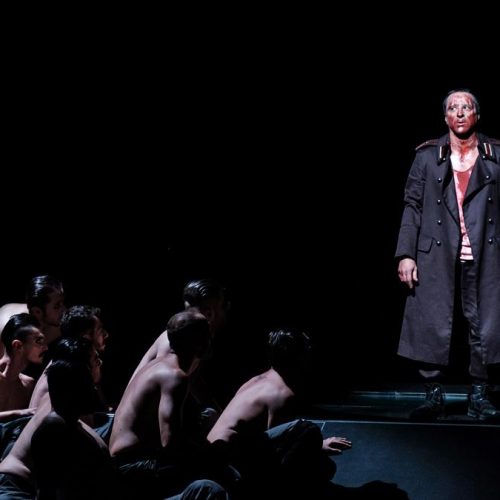 Genre of the show:  Teatru coregrafic

**Sound effects at full intensity and strobe lights are used

"The show proposes a meditation on the dementia caused by blind hatred, the mechanics of war, the fascination with violence and brute force. Through the cinematic stylistics adopted, that of the tableau vivant, supported by music and the vibrant kinetics of robotic bodies, the narrative core is reduced to its essence, highlighting a disturbing paradox: thanks to a moment of bloody madness, which disgraces him in front of his comrades in arms, Aias rediscovers his human dimension, fragile and mortal. Madness has become the catalyst for a state of extreme lucidity, in which the human being becomes fully aware of the vanity of hatred, the relativity of glory and greatness, the unpredictability of human destiny. So, "Expect anything at any time!"

The Achaean generals are adrift from the moment Aias, blinded by the gods, mistakes the animals for those he wants revenge on. The dramatic scenario proposed by Anca Măniuțiu, in collaboration with the director of the show, aims at the heart of the madness of Aias, the Homeric hero close to Achilles, the one who died under the walls of Troy. From there the ordeal begins: after Achilles is mortally wounded by the arrow shot by Paris, Aias, protected in battle by Ulysses, brings the hero's corpse to the camp of the Achilles. But Agamemnon does not reward his heroism and decides to give Odysseus the dead hero's weapons. Hence the blindness, anger, and insanity caused by the gods that lead him astray from his plan. Aias falls into the pit of dementia from which he tries to escape through a sinister language "which he learned not from a mortal but from a daimon" (Sophocles, Aias).

"The strength of this show seems to me to come from what the conveyor belt suggests. Its continuous flow is a simple reference to the march of history, less the great and more the small. The individual is carried without escape in one direction, imperturbably. The sounds with their cadence, not so much military as of a mechanism above man, impose and subdue. Mihai Dobre's music and Andrea Gavriliu's choreography convey a state of "man under the weather", but not with fatalism, but with a continuous test of strength. The soldiers recall, with a hint of a detached smile, the rituals of exotic tribes or children's games. Especially as men seem to remain eternally at the age of brave games. The strongest image they offer is of half-naked bodies, reminiscent of the phrase "cannon fodder". They are many and submissive, enslaved to long-cultivated rules and ideas, always on the edge of life and death, yet intrigued by the fantasies of Aias, the one overwhelmed by what he cannot explain."

"The dance theatre that Mihai Măniuțiu proposes here is determined by the substance of the text, it results from the dramatic tension. The prolonged experience of war triggers the blindness of Aias, (who slaughters herds of cattle believing them to be enemies), pushes him towards madness and death, the two daughters of darkness in Greek mythology, in fact "at the gates of darkness" is a recurring phrase. Claudiu Bleonț succeeds very well with Aias's disorder, the torture of the soul, the descent, the turns at the edge of reason, the whole course of the attempt to recover if not his judgment, at least his honour. (...)

The aide-de-camp (George Albert Costea) enters a persuasive dance, catches Aias a game of confrontation of wills, of a hidden eroticism, between fantasy and act, in one of the most expressive dance-clashes in the show, in which the engagement of the two actors is total. (…)

Mihai Măniuțiu's performance activates both intellectual emotion and sentient experience, leaving behind tension, a tense atmosphere and an invitation to meditation."

"The show manages to capture in just 75 minutes the turmoil and chaos that engulfs the Achaean army following Aias's slaughter - not only does he lose his compass, but so do the soldiers who were previously under his command. Through cool, hypnotic choreography by Andrea Gavriliu and supported by the minimalist, contemporary set designed by Adrian Damian, the band of soldiers appears as a compact herd driven this way and that. Accustomed to attacking in sync on the battlefield, the brave heroes retreat in fear when Aias appears on the scene, whom they now no longer recognise or understand. The only one who makes the effort to reason and talk with Aias, to turn him from his decision to kill himself, is his henchman, played by George Albert Costea. He pairs well with Bleonț in both lines and choreographic duets that combine elements of masculine, military aggression with genuine moments of tenderness, concern and humanity."