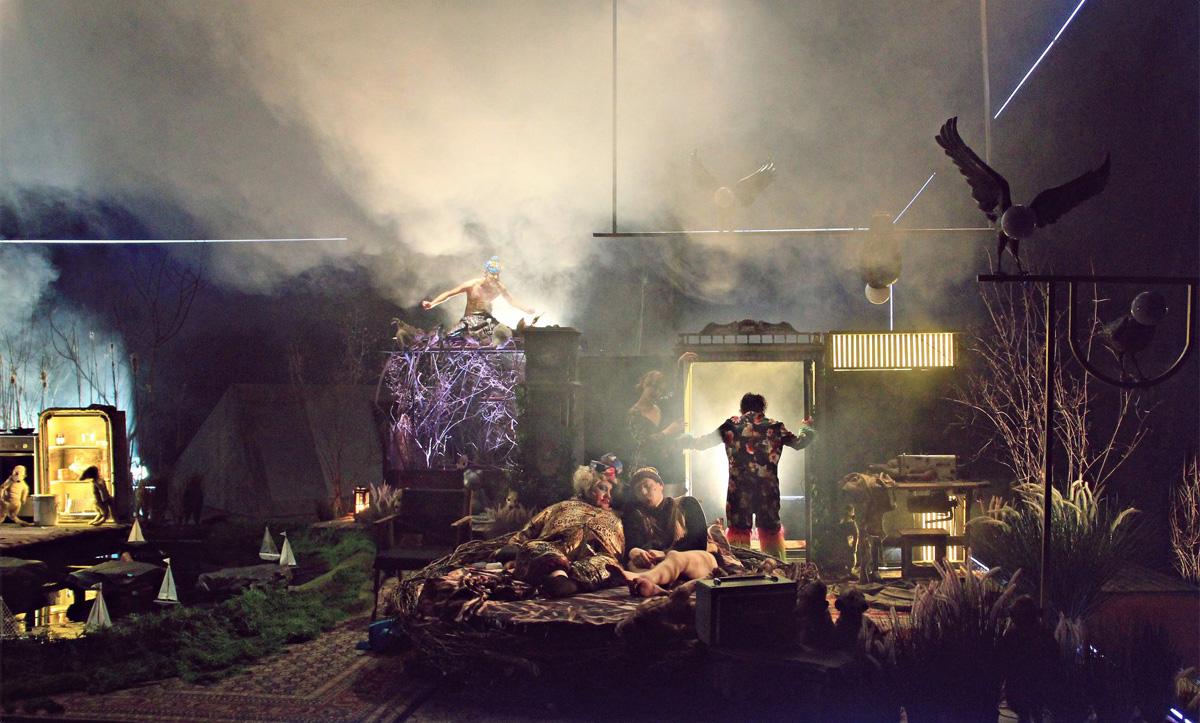 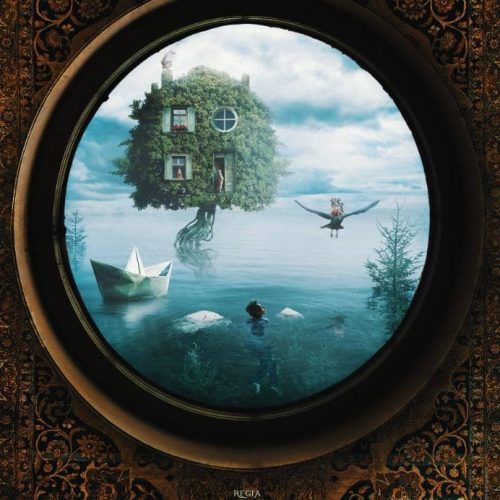 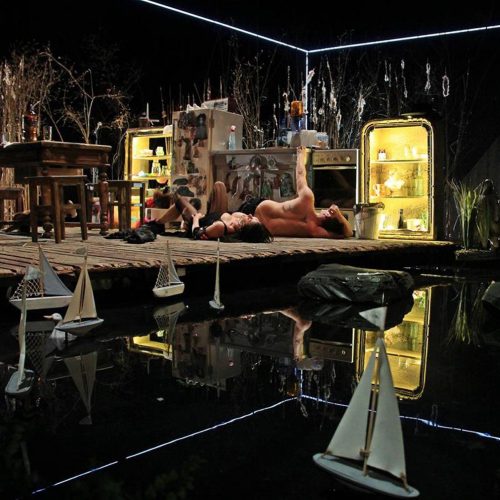 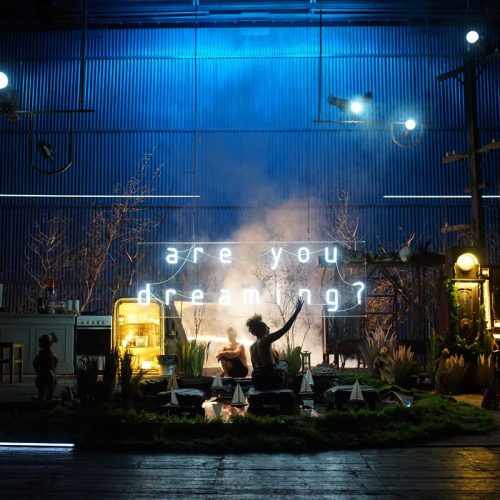 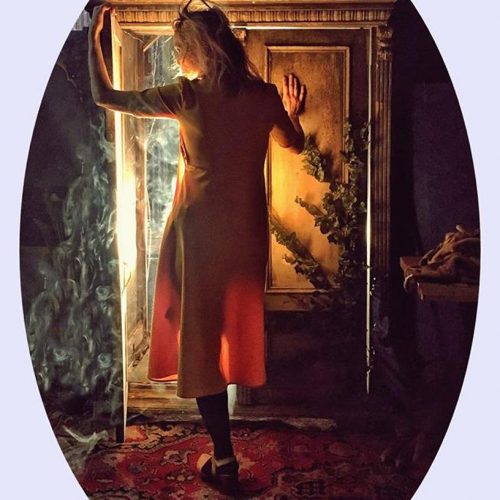 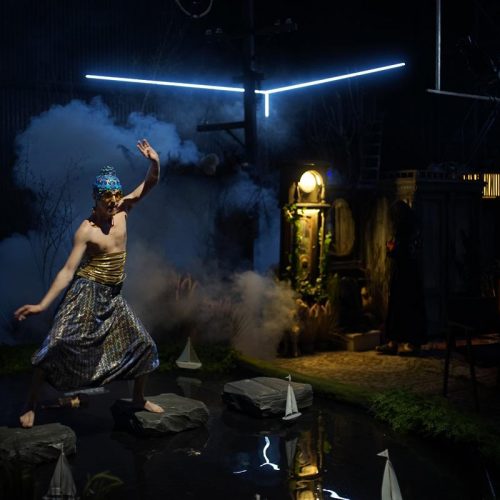 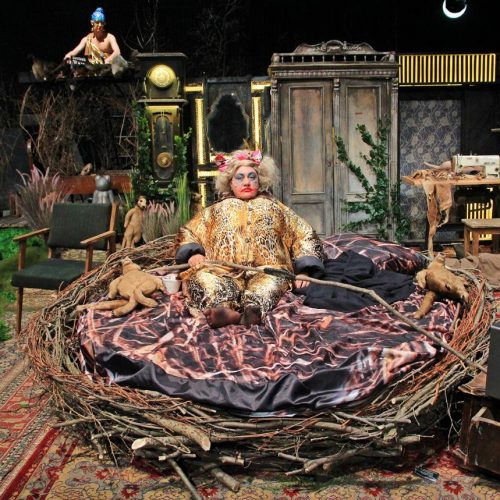 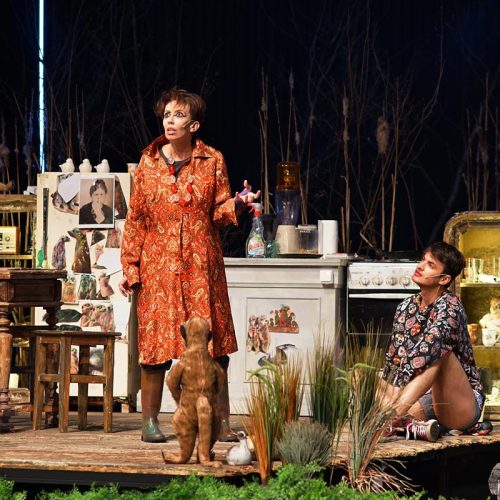 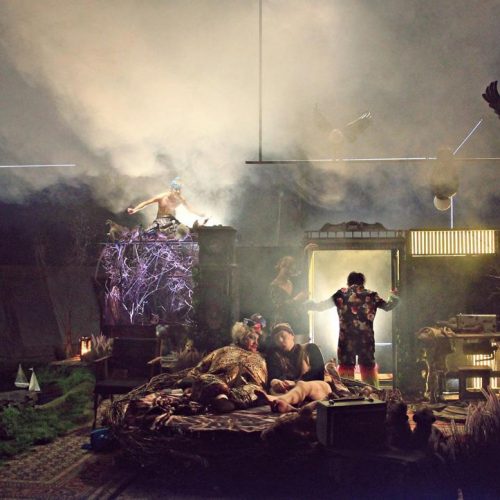 In a house full of meerkats, besides hoofed birds and a dead mole, live three sisters. The youngest sister is haunted by the memory of an insane mother and hasn't left the meerkats for a year since her father's sudden death. The BIG one snuggled in front of the TV and ate herself into immobility. The middle sister is the only one who works to maintain the house with meerkats. Everywhere and everywhere the spirit of a fake Buddha rules. The girls are trapped in this extravagant universe. Three men come into their lives and disrupt their existence.

"If in the director's other shows there were only such touches that marked the language, as Afrimian elements of spectacular construction, here a new language is practically created, supporting the sisters' enclosure that delimits their territory not only physically, but also through language... Are you dreaming? asks the director at the beginning of the performance and gives way to this absurd, romantic, comic and nightmarish dream. It is Afrim's universe, with real and unreal characters ("former" characters, as the Groper in Hamlet says) coexisting in a space on the edge of the imaginary, a world suffocating in its own fears and fantasies.

As in most of his performances, Afrim makes the convulsions of the emotional visible."

"The sensitive performance conceived by Radu Afrim tries to tell about the universal something and someone in us, tries a transcendent positioning starting from and focusing on the particulars of some people and their life situations as seen in David Drábek's text, translated by Mircea Dan Duță... a dreamlike atmosphere in which the scenery involves natural elements (water, pond), animals that seem to be in a state between life and death (meerkats that move without being alive and whose appearance does not, however, make you think of taxidermy), a blooming buddha situated above things, somehow upstairs, bearded vultures and a slowly descending panel from which the white neon asks are you dreaming? "

Mădălina Nica, With at least "a touch of empathy" about a lot of tenderness, SpectActor magazine no. 1/2019

"...women are the bearers of the message. The most spectacular is uttered by Raluca Păun at the turning point of the show, after enough sympathy from the audience. Irumpe on stage faithfully reproducing the character played by Divine (drag queen, here's another "mole gallery" that Afrim "digs" in the show) in Pink Flamingos, a reference to the current "abject art" - the starting point for a post-show discussion, delivers a well cadenced speech that amazes, then ignites and excites the audience as at an election meeting. Even if they may not fully realise what they are being told: trashy films, "no more multiplex films", "no more skimpy women", they can't help but cheer at this point of the "manifesto": "let's act in films, us, with real names". And Radu Afrim's creation is sustained by this manifesto."

Marius Dobrin, The covers of our lives, SpectActor magazine, no. 1/2019

Irina Moscu's set design - as always, flamboyant and flamboyant - provides the amalgamated stories with an optimal space to unfold, both functionally and expressively. As always, the scenic image of Afrim's performances seems drawn moment by moment. Integrated into the scaffolding, the characters acquire a plastic individuality that stimulates their evolution as signs of ideas. All the actors become bearers of the burden and surrender their individuality to the dramaturgical gearbox in order to regain it, enriched and ennobled. In a ritual with many breaks of rhythm that ensures the pulsation of a strange but nevertheless alive organism, with oscillations from the grotesque to the oneiric, TRUPA (i.e. Raluca Păun, Iulia Lazăr, Ramona Drăgulescu, Alex Calangiu, Claudiu Mihail, Vlad Udrescu, Cătălin Miculeasa, Romanița Ionescu, Constantin Cicort) demonstrates its homogeneity, strength and talent. The show's creator rewards their devotion and skill with highly effective solutions, managing to highlight them despite the unusual way in which the characters are constructed from a dramatic point of view. The modernity and originality of the approach are beyond doubt. De(con)structivism has come to power. And this is an absolute one. We laugh, before we go mad and find ourselves rinocereally homogenised in the melting pot of the times.

With a little care and a touch of patience, all the narrative threads close at the end, like the door of the house where the ghosts with the role of parents' crutch leave, to leave behind the present that kind of denies its hope. A rather slow show, with an atmosphere, jazz and mood (despite the unexpected acceleration of events near the end and the remarkable dynamics of the two monologues, one in each half, of the excellent Raluca Păun), House of meerkats it depends on the form of the actors and the goodwill of the spectators. The shape of the first ones can give the three hours a charming fluency, the goodwill of the last ones can lead to the understanding of the carefully-camouflaged meanings and to the soaking of emotions in sight.