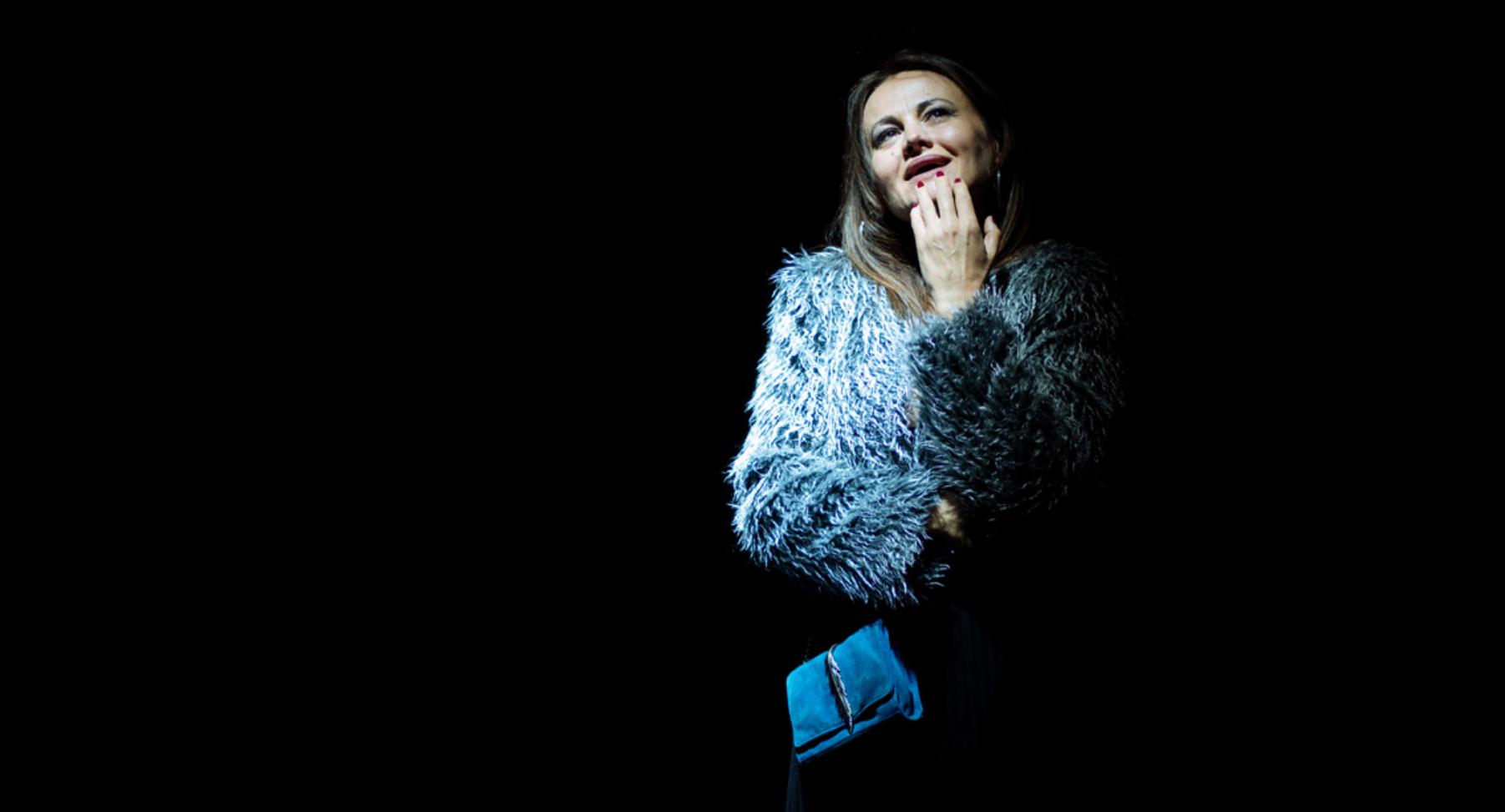 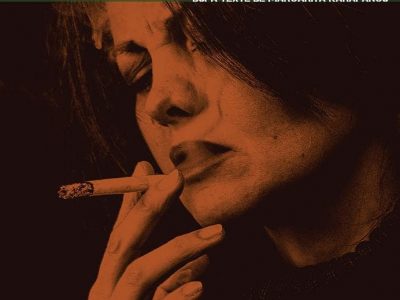 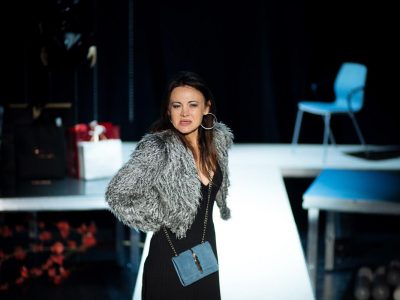 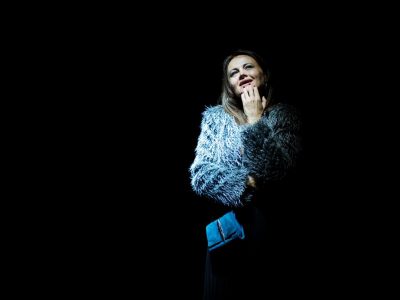 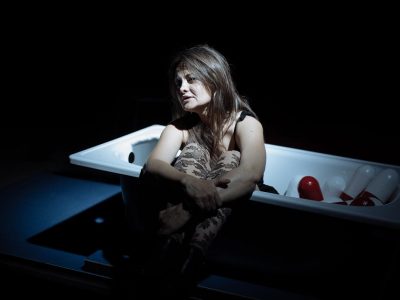 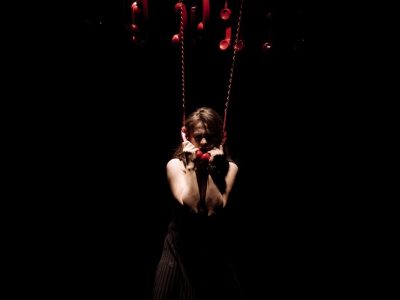 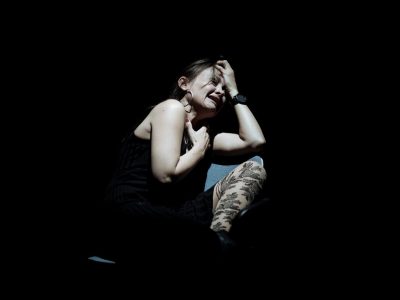 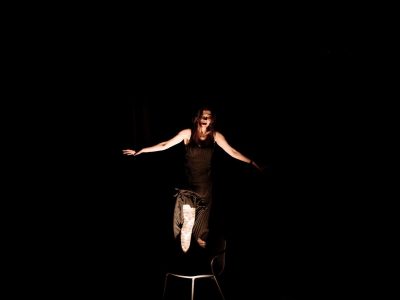 after texts by Margarita Karapanou

Genre of the show: one woman show

Lora is suffering. Lora is waiting. She lives every feeling to the fullest. She fights depression and doesn't let it defeat her. She talks about her illness like a lover, holding her too tightly, smothering her with too much passion. She's sensual, intelligent, witty. She goes out to hang, to shop, to the park. She often goes to the clinic. And she writes. She writes with passion. She writes with her IV in hand and seeks tenderness, but chooses, in a destructive and risky way, human closeness in its most bizarre forms.

"From the text, but also from Cerasela Iosifescu's interpretation, a strong character emerges, excellently shaped. The directness of the writing and the surprising humour, despite the details about illness and treatment, ensure a deep impact, as do the many surprise-effect sentences, built on the play of contrasts between the beginning and the end."

"Cerasela Iosifescu is a stretched bow, a vibrating string. Oscillating between the extremes and obsessions of Lore, the actress doses her strengths remarkably, she gradates her means, she naturally changes registers. For an hour, we witness Lore's turmoil and trembling. Without pathos. With lucidity (...) between the catwalk and the projection screen in the background, her life is spent: between oversized pills, between the bathtub and the hospital bed, the mirror as the pole of the self and the red sexy phone-line, the connection with the outside."

"The show Obsessions is a production about the abyss. And who knows more about the abyss than a bipolar? [...] All the desperation, at times diabolical, of the sick woman, who wants to die and cannot die, is transfigured by Cerasela Iosifescu, who sometimes seems to break on stage, so well does she play the character's bipolarity. The role, of great difficulty and complexity, by the paroxysm of the feelings, by the duality of the extreme states - from joy to anger and sadness - is a test, for more than an hour, for any actress. Cerasela Iosifescu throws herself, with all her being, into this challenge and goes, movingly, through the whole of this role."

"Cerasela Iosifescu composes one of the most remarkable performances. Margarita Karapanou is Yannis Paraskevopoulos' favourite writer and Cerasela Iosifescu, his favourite actress, a 'happy' meeting and several accomplished creations (Medea, Irina Arkadina), the text is written for her, and Obsessions takes their collaboration to another level, a provocative and assertive monologue-testimony of existence, marked by a mental illness. The biographical and literary fragments are transformed by the director's solutions, by interpretation, by capturing the extremes (...) Lora changes several masks and tries on several roles, she builds a moving portrait, in divergent positions with the image of the mother around which she embroiders an entire mythology. The mother she seeks out, who is waiting to pick her up from the clinic, whom she accuses of abandoning her, or who, on the contrary, suffocates her, takes her clothes, her perfume, meddles in her love life. It's a love&hate relationship, which eludes categorization, perhaps the most expressive image is the mutilated doll, later substituted for the mutilated figure of the mother, "Mom, I love you! I wish I could cut off your arms and legs so you could fit in my heart".

"Claudiu Sfirschi-Lăudat's dramatization starts from the translation project of Margarita Karapanou's autobiographical volume Da and succeeds in maintaining the distinctive note of her writings, disordered, out of control, in which fragments, fragments of text are assembled and what seemed to be a monologue develops dramatic tension, conflict, controversy. The result is an extremely exciting score for an actress - Cerasela Iosifescu composes one of her most remarkable performances. Margarita Karapanou is Yiannis Paraskevopoulos' favourite writer and Cerasela Iosifescu her favourite actress, a "happy" meeting and several accomplished creations (Medea, Irina Arkadina), the text is written for her, and Obsessions takes their collaboration to another level, a provocative and assertive monologue-testimony of existence, marked by a mental illness."