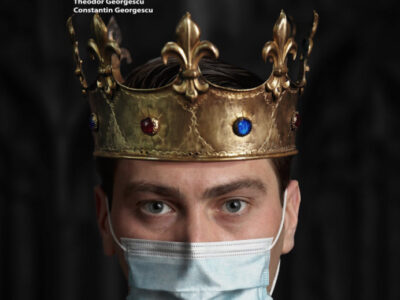 Translation of the tragedy: Theodor Georgescu and Constantin Georgescu

Children Ioana Vicol and Romana Vicol are part of the show

Touring show inside the theatre / standing room only

Duration of the show: 80 min. without break

"Tragedies are not about heroes, they are about us ordinary people. At first, they may seem like an exotic painting, but on closer examination, they become a mirror. The process can remind us that if we ever point a finger at anyone else, we will discover that we have three more fingers, pointing at us, even if hidden in the palm of our hand. Oedipus does just that when he declares that he will find, punish and humiliate the murderer. But the murderer is himself."

(Declan Donnellan / excerpt from the programme book of Oedipus Rex)

Oedipus is part of the tragedies of the Teban cycle, Oidiopoidia, is a tragedy written by Sophocles (ca. 496 - 406 BC), dated around 430-428 BC. Sophocles assimilates the myth of the Labdacids and picks up the story from the time when he is already king of Thebes and the city is captured at a critical moment - the plague epidemic of 430 BC, the second year of the Peloponnesian War. Oedipus' subjects come to the palace, begging him to save the city from the plague. Creon, Oedipus' brother-in-law, brings a verdict from the oracle at Delphi: the plague will not end until the murderer of Laios, the former king of Thebes, who had been killed many years before, is driven from the city. Oedipus is once again in a position to save Thebes - as he did when he defeated the Sphinx - and the Delphi ultimatum - solves the crime, or the plague continues - makes Oedipus his own detective and judge. Oedipus launches an investigation to find out the truth about his origin: Oedipus is the son of Laius, whom he murdered without knowing who he is and then married his mother, Jocasta, who bore him four children. After learning the truth, Jocasta kills herself and Oedipus gouges out his eyes.

Declan Donnellan was born in England in 1953 to Irish parents. He grew up in London.

In 1981, Declan and his partner Nick Ormerod founded Cheek by Jowl. The company's first production was The Country Wife and premiered in 1981 at the Edinburgh Film Festival. Since then, the company has travelled the world with performances in English, French and Russian.
In 1989, he became associate director of the Royal National Theatre in London. His productions at the theatre include: Fuenteovejuna de Lope De Vega, Sweeney Todd: The Demon Barber of Fleet Street de Stephen Sondheim, The Mandate by Nikolai Erdman and both sides of the Angels in America by Tony Kushner.
Donnellan directed for the Avignon Festival (Cidul); Maly Drama Theatre from St. Petersburg (The Winter’s Tale), Noel Coward Theatre (Shakespeare in Love), Piccolo Teatro Milano (The Revenger’s Tragedy) and also, Falstaff, pentru Festivalul de la Salzburg, împreună cu Claudio Abbado. El a creat și a regizat spectacolele balet Romeo and Julieta and Hamlet pentru Teatrul Balșoi din Moscova.
Donnellan wrote the play Lady Betty and translated works by De Musset, Erdman, Sophocles and Lermontov.
He has received numerous awards in London, Moscow, Paris and New York, including four Olivier Awards, the Order of Charlemagne of Andrei, the International Stanislavski Prize in Moscow and the Golden Lion in Venice.
His first film, Bel Ami, co-directed with Nick Ormerod and starring Uma Thurman, Kristin Scott Thomas, Christina Ricci and Robert Pattinson, premiered in 2012.
His book, The actor and the targetwas published in Russian in 1999 and has since been translated into over 15 languages including French, Spanish, Italian, German, Romanian and Mandarin.
The third French and fourth English editions were published in 2018.
His book written with Arantxa Vela, Donnellan on Shakespeare, will be published in Romanian in 2022.
A sequel to this book will be published later this year. His "not true but useful" podcasts presented by Cheek by Jowl with Lucie Dawkins have been downloaded in over 100 countries.

Nick Ormerod studied Theater Design at the Wimbledon School of Art.
He founded Cheek by Jowl with Declan Donnellan in 1981. Since then, the company has created shows in over 400 cities. Cheek by Jowl has also received numerous awards around the world.
Among the projects he created are: Fuenteovejuna, Peer Gynt, Sweeney Todd, The Mandate and both sides Angels in America  for the National Theatre in London; The School for Scandal, King Lear and Great Expectations (which he also co-adapted) for the Royal Shakespeare Company; The Rise and Fall of the City of Mahagonny for English National Opera; Martin Guerre, Hayfever, Antigone (West End, London); Romeo and Julieta and Hamlet for the Bolșoi Theatre; Falstaff for the Salzburg Festival.
In 2012, Ormerod co-directed the film Bel Ami with Declan Donnellan.

"In what way can a man living today be drawn to the ancient myths, to the full force of Hellenic tragedy? Tragedy has not for a moment disappeared from the essence of humanity, because humanity contains it. Even today, and at this time, all the black gifts in Pandora's box are still being released into the world, and any man who struggles with the anemones of life can be considered a tragic hero.
The tragic hero stands at a crossroads in a entre-deux which is a priori exhausting. Standing at the crossroads between lucidity and irrationality, between feeling and conscience, the tragic character crosses the nerve points of his existence. His journey starts from a point where everything is good for him and ends at a point where everything is bad for him and always fatal. Oedipus makes such a journey, and his journey to the truth is also the journey to his destruction as an individual. For Oedipus the sacrifice of sight has atoning connotations. (...) Oedipus remains the disturbing image of the blinded one, son and murderer of his father Laios, fruit and graft of Jocasta, (*Radu Stanca, Oedip salvat, 1968), the heroic saviour of the city, bathed in glitter and glory, who is torn from this state of grace, discovering the essence of his guilty existence. To make his fall from the heights all the more heartbreaking, fate offers him everything: the satisfaction of victory over the Sphinx, his coronation, his marriage to Jocasta, the birth of his four children. Draped in a shining veil, Oedipus' sinister destiny consumes his entire lineage. Seeking to illuminate his existence by discovering his origin, Oedipus plunges into darkness forever."
(Haricleea Nicolau / excerpt from the programme of the show Oedipus)

· “The British director has a close relationship to the so-called “Bănie” community, thanks to the International Shakespeare Festival. What he has established himself through throughout the seasons is the predilection for creative solutions, generating beauty and generating the unexpected. The beauty of simplicity, of a profound, elaborate simplicity, of surprising solutions, implemented by acting teams who fall in love, from a professional point of view, with his working style. A refined simplicity that sets the artistic direction and conquers through the naturalness with which it grows in front of the audience (...)

And there is also a very clear intention in the director's thesis: the idea of travel, of traveling together along a physical, but mostly fictional, audience-artist route, where the actors guide the neophytes. An aesthetic route, a cathartic route, together, on a common path. (...)

Playing the eponymous hero’s part, Claudiu Mihail dominates the entire performance. He finds the right resources and the appropriate dosage to traverse the wide and varied range of states that define the character. He has everything under control, you can feel his breathing and concentration, he's volcanic, he transfers energy when he passes by you or utters his line by looking at you straight in the eyes or touching your arm just like in an authentic agora. And that is because the space of the theater became in turn the public square, the halls of the royal palace, the shepherd's house, the road on which Laios was killed.”

• "The constant closeness between the audience and the actors makes the spectators' viewing experience, as the director wanted, very intimate, but it also exposes the actors enormously, they are unable to hide or defend themselves with the help of the décor, the partners or, ultimately, of the distance from the viewers. This kind of interpretation, in which you always have to be careful, even at the level of the voice, is not something easy, especially since the idea of ancient tragedy is prone to ritual and ample gestures, not to the rough realism of such an approach. And not everyone comes out equally well from the confrontation with this type of a zero-degree intimacy of acting. (…) What is truly amazing in this Oedipus is the clarity with which Declan Donnellan extracts a profoundly contemporary (because eternally and universally human) essence from Sophocles' text: the arrogance of trying to defeat the conditions of reality by ignoring them."

“Oedipus is here, energetic, "not a god, but a man", a citizen of Thebes, and Claudiu Mihail is completely assuming the role, he is blending among the spectators, uttering his lines while looking at them in the eyes, greeting, shaking hands, composing the present and thus we are all present on stage and invested with responsibility. (...) Beyond the vis dramatica, the dramatic force of the text uttered by the actors, the tragedy does not materialize in the absence of communion with the spectators. And the director's strategy is exactly this, that of the junction of the actors with the audience, which are invited to another area of the stage and Oedipus integrates the spectators, who receive a new status, as citizens of Thebes (...) Jocasta is the character who temporarily calms the fears of Oedipus. Ramona Drăgulescu, through her role, is describing the uncertainty of her own identity, in nuances. In her red dress, visible from every corner of the stage, she is the symbol of a seductive maturity. (...)

Declan Donnellan's solution in this second apotheosis of Oedipus maintains the note of the spectacular: the exile is transposed to the spatial level, the expulsion from the fortress becomes the expulsion from the scenic space, from the theater. The tragedy of Oedipus, as he appears to the spectators for the last time, through the theater windows, naked and bloodied, is the expression of that cry of pain of loneliness of the one who is parted from the world through his thought and sacrifice”. (Daniela Firescu, Oedipus, the pain cry of solitude / Ramuri, July/2022)

“Dressed in an elegant black suit, like a young and a bit demagogic politician (...) constantly among the people, Donnellan's Oedipus has much of the persuasion of our world leaders. (...) The story flows, a female Tiresias played by Tamara Popescu comes on stage, raises her staff while uttering half-truths, a strange presence, a mixture of femininity and masculinity who, of course, essentially aims to serve as a sort of explanation across the centuries to the sexual revolution we are experiencing today. (...) Declan Donnellan's staging captures the subtle way our world has chosen psychology over philosophy... and the way the tragic has failed in drama and melodrama. But the images at the end, with an Oedipus wandering, his blood dropping, wandering in the light, behind some windows ironically bathed in sunlight and green nature, and then the meeting with the little girls (who are also his sisters...) in a large, empty hall, impossible to fill, in which helplessness breathes like a cry of despair, they restore some kind of balance...” (Monica Andronescu, Oedipus in the pandemic era / artitudini, May 24, 2022)

But the images at the end, with an Oedipus wandering, his blood dropping, wandering in the light, behind some windows ironically bathed in sunlight and green nature, and then the meeting with the little girls (who are also his sisters...) in a large, empty hall, impossible to fill, in which helplessness breathes like a cry of despair, they restore some kind of balance...” (Monica Andronescu, Oedipus in the pandemic era / artitudini, May 24, 2022)