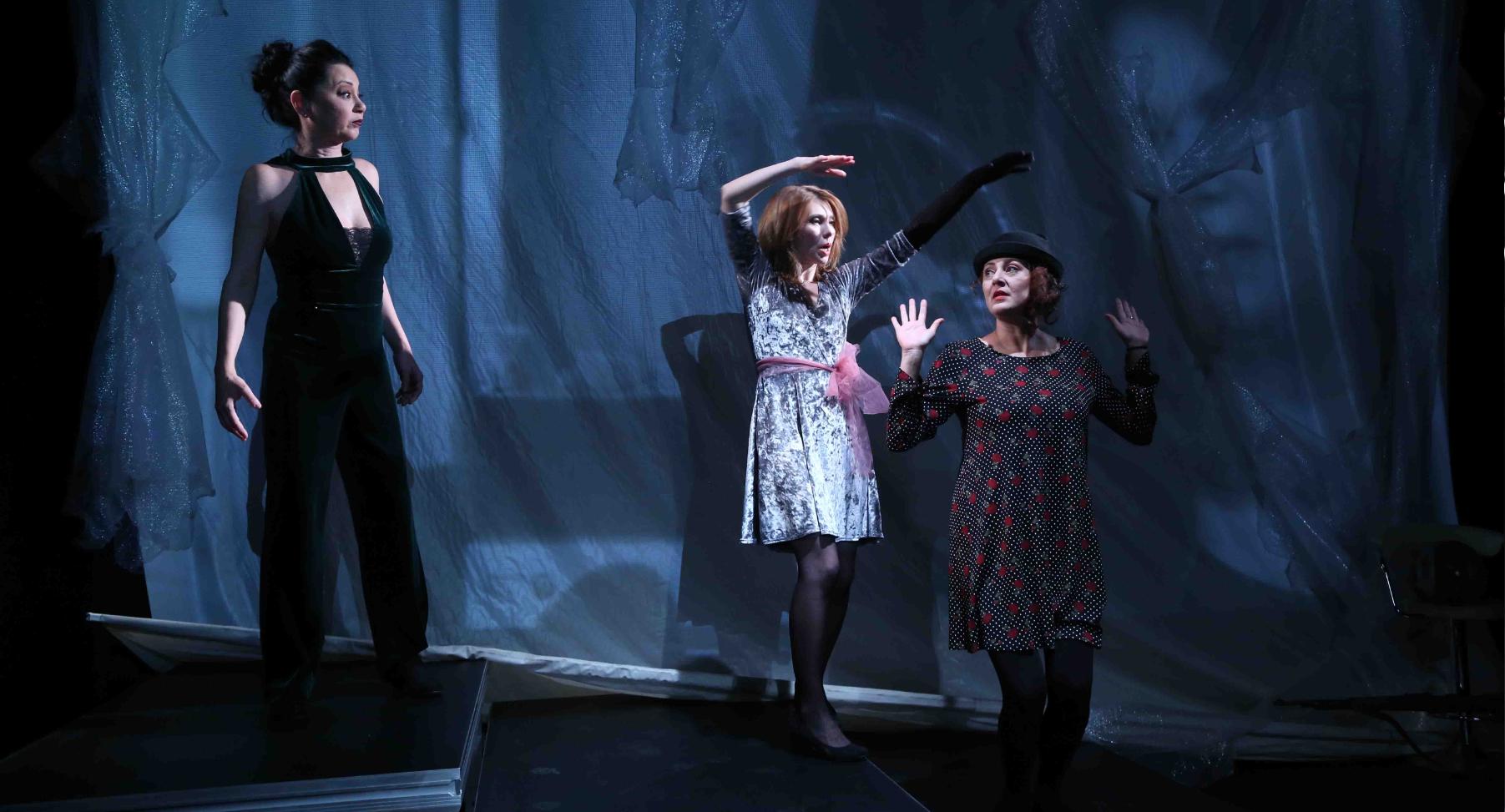 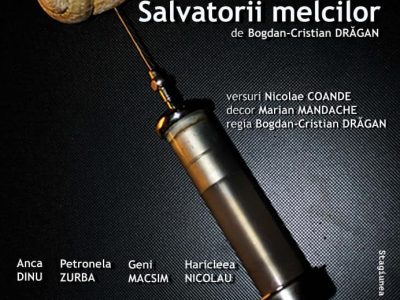 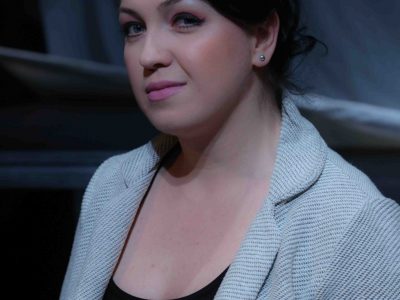 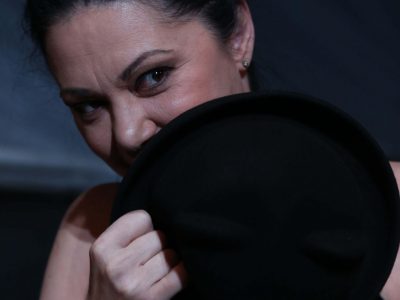 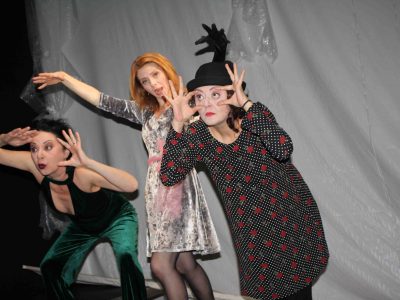 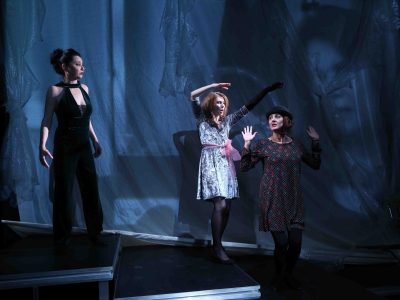 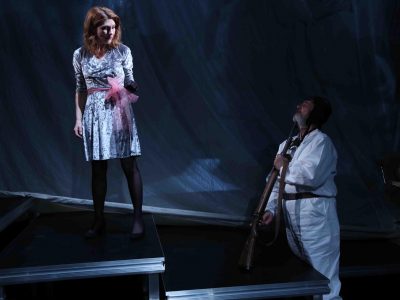 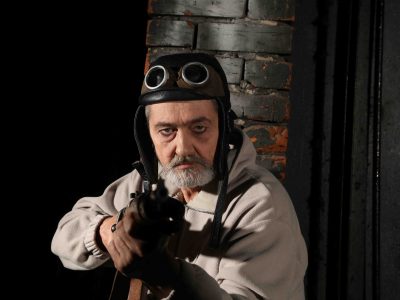 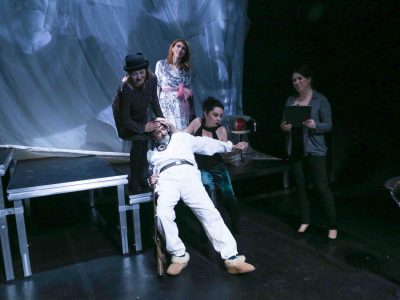 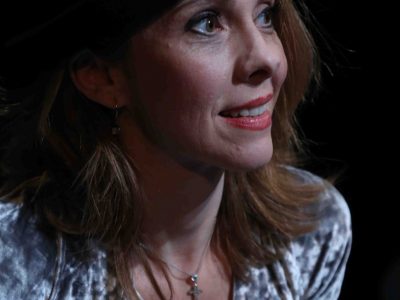 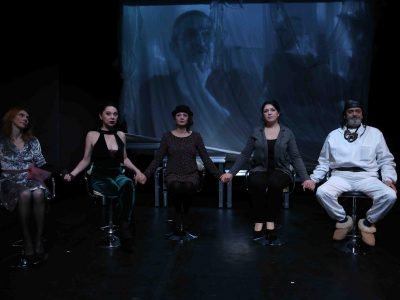 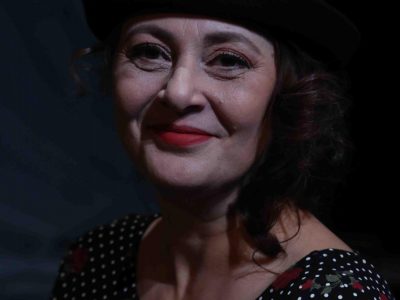 The cast of the film screened in the show:

How much of his being does an actor leave on stage after each performance? How much of an actor's role remains in his or her being as soon as the make-up is gone? Three sisters who are actresses, a brother who is also an actor, a father who is an astronomy professor and a mother who is a famous actress, plus a psychotherapist - these are the characters of the tragicomedy "The Snail Saviors". In fact, this play is a plea for performance, for the show on stage or on the set, but also the show of life, sometimes more powerful than any fictional representation. The actors play, but they are also played, in a carousel of funny or tragic events that make you wonder if you are on a theatre stage or even in the everyday lives of those who embody the characters. But don't be fooled: nothing is what it seems.

"Bogdan Dragan expands the meaning of the piece to what conveys the greatest emotion. And it must be said that the performance is important not only on the general text-performance level, but also through the human substrate that also concerned the cast (...) The image of the four actresses: Petronela Zurba, Anca Dinu, Geni Macsim, Haricleea Nicolau, holding hands, together with Tudor Petrescu, their partner in the cast, is full of emotion, one felt by those close to the theatre. Bogdan Cristian Drăgan thus brings to the stage a performance as an exercise in admiration, as a gesture of appreciation for actors, such as our hurried lives too rarely see. (...) Petronela Zurba opens the series with ease, with an air of springtime that we have not seen for a long time, if not unprecedented on the Craiova stage. We thus have scenes that could foreshadow a one-woman-show by the actress. Of great comic effect is the rhythm in which she describes, through paradoxes, the marriage of her character: "always attentive, pedantic, perfumed, polite, elaborate". (...) Anca Dinu appears in a position to make the most of a subtle humour, developed after complex roles in HOT L Baltimore and Spargerea (...) she draws open applause when she ironises, including a clever dose of self-irony, a fairly common way of doing talk-show. (...) The character of therapist Ana-Maria Ionescu Puțuri, in a perfectly adequate performance by Haricela Nicolau. With a subtle humour, this role comes, somehow, as a continuation of the one in Project Oreste, offering a character characterized by a mixture of seriousness and comedy, vulnerability and superficiality (...) Haricleea Nicolau pronounces with a warm voice, well dosed, even with a played hesitation of a deconsecrated professional inconsistency, typical phrases, generating laughs. (...) Geni Macsim came across as the most serene, apparently without any intention of expressing herself. This role is captivating precisely because of the harmonious attitude that outlines a strong personality." Translated with www.DeepL.com/Translator (free version)

"Scenes from the lives of actors and (or) puppets," could be a synopsis of the show imagined by Bogdan-Cristian Drăgan, The Snail Saviors. A fertile subject that here becomes a pretext for bookish experiments, for a game of luring the audience, who are challenged to go back and forth on the plot, a parodic recycling of Chekhovian themes.The result is a hybrid composition between a theatre in which the actors are emotionally involved, a self-reflexive theatre and modern technologies. Inserted film fragments, where the enlarged faces of the actors reach the dimensions of the screen, bring another form of connection with the audience, as well as documenting personal experiences. The (melod)dramatic deposition of the three sisters is counterbalanced by the intervention of the psychotherapist, with an agenda of her own from which she does not deviate: "what is happiness?". The comic pattern is carefully structured and the recitation of the definition of happiness repetitive. The play of movements and lines, the crescendo sequences take the action beyond the tightly set dramatic situations, and among the most authentic moments are those in which the four actresses (a remarkable collective performance) search for the play/reaction that brings the action to life, or the uncharacteristic moments of explicit parody of rehearsals in a hypothetical performance."

Daniela Firescu, Scenes from the lives of actors and puppets / RAMURI magazine, no. 4 / 2018

The performance "The Snail Saviors" by Bogdan Cristian Drăgan received the Special Jury Prize at the Contemporary Romanian Drama Festival 2018.