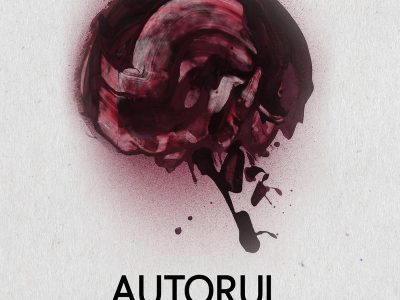 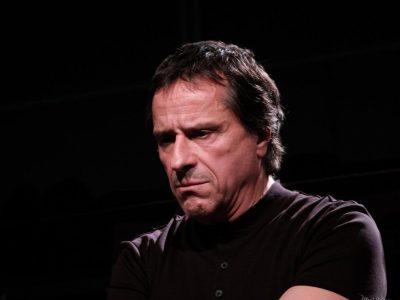 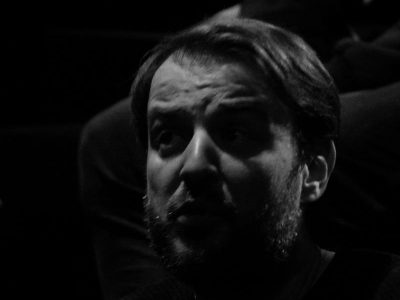 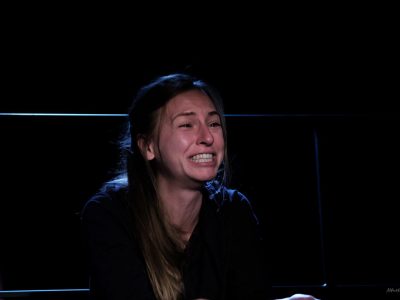 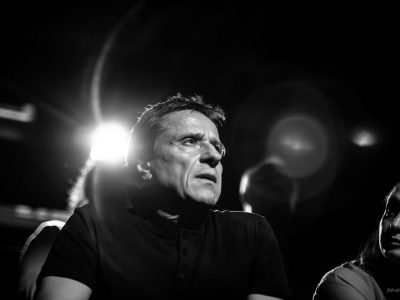 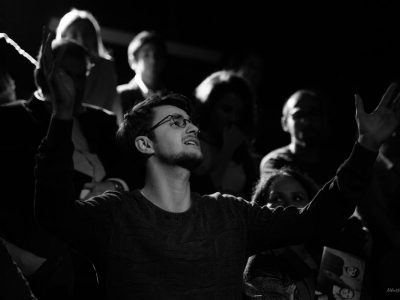 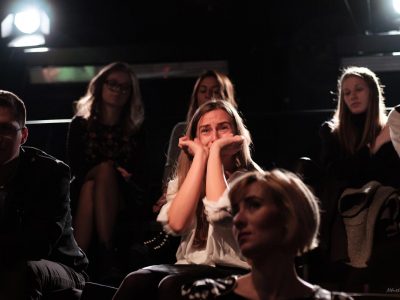 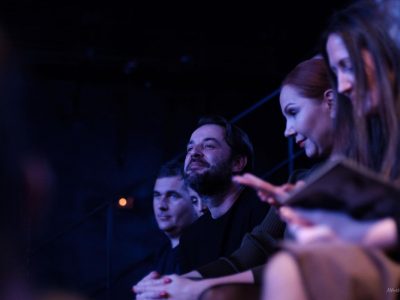 The show directed by Bobi Pricop tells the story of another play: a violent, shocking and abusive play written by a screenwriter named Tim Crouch, and recounts the effect the show had on the two actors who starred in it, the screenwriter who wrote the play, and an audience member who watched it. It also makes connections to the wider world in which such a play might be written and presented to an audience saturated with violent imagery and governed by the need for impact of any kind. It also examines the consequences of this need for mediatisation in both art and everyday life. "The Author" is a show about what it means to be a spectator and about our responsibilities as free people, beyond and beyond any involvement. You can't simply remain neutral or indifferent.

"In the show performed at the Marin Sorescu National Theatre in Craiova, Bobi Pricop shifts the spotlight on the audience, refusing theatrical conventions and proposing an unusual formula of performance. Tim Crouch's playwright dismantles the canonical theatrical art from the writing stage, betting on the audience's participation in the creative process. (...) Crouch's stage rhetoric delivers to the audience not a pre-constructed performance, but one that is perfected through the viewer's involvement. The author is, after all, about the spectator, about how the spectator can, through direct intervention, enhance the dramatic intensity. (...) The audience's fantasy resorts are stimulated by the new scenic context, in a pulverized, monologued storytelling that erases the interaction between characters, cancels out the scenic relationships. The performers deliver their lines seated among the audience, they are there only to tell what traumatic experiences they went through when working together on a show. (...) There are four narratives that intersect and weave, from end to end, generating the story of a performance that is terrible in the atrocities it re-presents. It's a retrospective narrative constructed from highly visual sequences, from which the viewer composes what in classical terms is spectacle. Different theatrical times and places interweave in a patchwork succession of perspectives, and the assemblage is made in the mind of the viewer and listener."

"Controversial playwright Tim Crouch is known for blowing up the conventions of the dramatic arts (...) What Crouch does is to tie the text very closely to the performance, leaving the director little room for creativity. The stakes of his plays are not about validating power, but about setting up a new network of relationships between author, actors, director, audience that takes everyone out of their comfort zone. (...) The author works in two directions: one is related to the cancellation of theatrical conventions, the second is related to the violence that surrounds us daily. Both directions are related to the responsibility - of art and media - towards the public and the constant exposure to violence (...)

Bobi Pricop's decision to keep the names of British actors as characters is the right one: it establishes a convention accepted by everyone. (...)

And a final question: what is the role of the director here, if the author's indications are precise and the performance cannot be done otherwise? One possible answer: to ensure that the entire theatrical architecture, unspectacular by the norm but spectacular outside the norm (the unconventional convention), is precisely established. And Bobi Pricop does exactly that.

"Tim Crouch leaves ample space for the spectator to manifest. Who is asked, invited, more precisely, provoked / summoned to intervene in the show, not as a disruptive factor, but even as a director with rights in places comparable to those of the author or actors. He, the spectator, has an agent in the person of the one who, in the case of the show of the Craiova National Team, is called Vlad. After the name of the actor who plays him and does it with an incomparable charm. It's about the young actor Vlad Udrescu. But he, the spectator, also has the right to intervene, directly in the performance that shows him how to do it. (…) Dizzying? Probable. But from this bewilderment arises the illusion. The higher illusion. Artistic. I mean the theater! ”

"The author is about us, about what we see and what we choose to see..it's a mind-boggling theatrical experience that spares no one, opening our eyes to what should be blindingly obvious: each of us can choose."  - Lyn Gardner, The Guardian

"The author is by turns funny, wacky, thrilling, heavy-handed or leaves you breathless and I don't think I'll ever forget it." - Dominic Maxwell, The Times

It's about abuse on behalf of the viewer. It's a story about hope, violence and exploitation. Laugh with the actors, tap your feet to the music and turn your eyes to the person in the next seat.

The "author" just uses words to show us things, and sometimes the things portrayed by those words are disturbing.

The show tells the story of another play: a violent, shocking, and abusive play written by a screenwriter named Tim Crouch and chronicles the effect the show had on the two actors who starred in it, the screenwriter who wrote the play, and an audience member who watched it. It also makes connections to the wider world in which such a play might be written and presented to an audience saturated with violent imagery and governed by the need for impact of any kind. It also examines the consequences of this need for mediatisation in both art and everyday life. "The Author is a play about what it means to be a spectator and our responsibilities as spectators. It explores the connection between what we see and how we choose to behave.

"I firmly believe that we have lost our sense of responsibility for the things we choose to look at." says Tim Crouch.

As a spectator, I love the feeling I get when I don't have to participate in something; just paying attention when a performance is happening. But Tim Crouch, in his famously experimental spirit, wants you to be watched, moved, self-aware; to be robbed of your comfort as a spectator. You begin to realise this when you enter the auditorium: there's no stage, just two blocks of seats facing each other, almost stadium-like. By the time the play starts, you're just facing the privilege of the other people in the audience and wondering where the actors are going to sit: at the edge of the auditorium, where there isn't even any light? Are they going to wander among the seats? Until, after all this fades into silence (and silence lasts a while, it embarrasses you), you find that the actors start talking away from you. The four (Claudiu Bleonț, Ioana Florentina Manciu, Vlad Drăgulescu and Vlad Udrescu) are scattered around the audience, and the beginning of the performance comes so naturally that you wonder whether or not it's part of the play. Therein lies the danger, perhaps, because when the story enters the auditorium, you don't even expect it, and it's far too late to raise your guard. (..)

The performance we are attending tells, in fact, another performance from multiple perspectives: of the author (Claudiu Bleonț), of the two actors (Vlad Drăgulescu and Ioana Manciu) and of the spectator (Vlad Udrescu). Wrapped in violent and abominable images, in traumas and abuses, the show also creates a second plane - the one in which it shows the audience the process by which artists create a role, and then the performance on stage, and poses a sensitive question: how does the actor change after working on a character? But the powerful, shocking moments remain those in which Ioana Manciu plays a teenage girl who was sexually abused by her father and his friends when she was just 12, and the final sequence that you can't help but see: the association of pornographic images with the presence of a baby. Tim Crouch's disgusting universe is very hard to imagine, let alone watch on stage.

"In a world where you are surrounded by gestures and acts of aggression, violence, abuse, abominable, macabre, bloody, disgusting events, director Bobi Pricop provokes reflection, through Tim Crouch's harsh text (translation Andrei Marinescu): where are we, where do we position ourselves, do we know how to react, do we make the right choices or do we let ourselves be carried away, do we still have discernment?

The director doesn't open the way to answers. He just shows us, he puts life situations on the wallpaper, mixes them up, good with bad, and increases the intensity of the horrors to a climax where you feel disgust and revulsion numb you.

The answers are always with us. In our choices."

"Basically, the scene is us looking at each other.
- eager not to assert myself, so I had no lines, although I could have - the excellence of the text lies, among other things, precisely in the fact that whatever you say and do as an audience member during the two intense hours in which actors and audience exchange lines, seems both appropriate and already written. The "author", as only a theatrical demiurge can do, has foreseen everything.
- aware that I am witnessing a practical demonstration of the #metoo hashtag (you know, the testimonies of assaulted women, determined to make their traumas public on social media), with the notable difference that in "The perpetrator" we also witness a self-confession by the perpetrator.
- turning my head after my fellow performers. And after the casual ones, i.e. the spectators who intervened on request or voluntarily, and after Claudiu Bleonț (Tim), Ioana Florentina Manciu (Esther), Vlad Drăgulescu (Vic), Vlad Udrescu (Vlad). The real actors in "The Author" make up a cast that, thanks to director Bobi Pricop, is a "perfect match" like when you're lucky to find what you're looking for the first time after swiping right on Tinder."